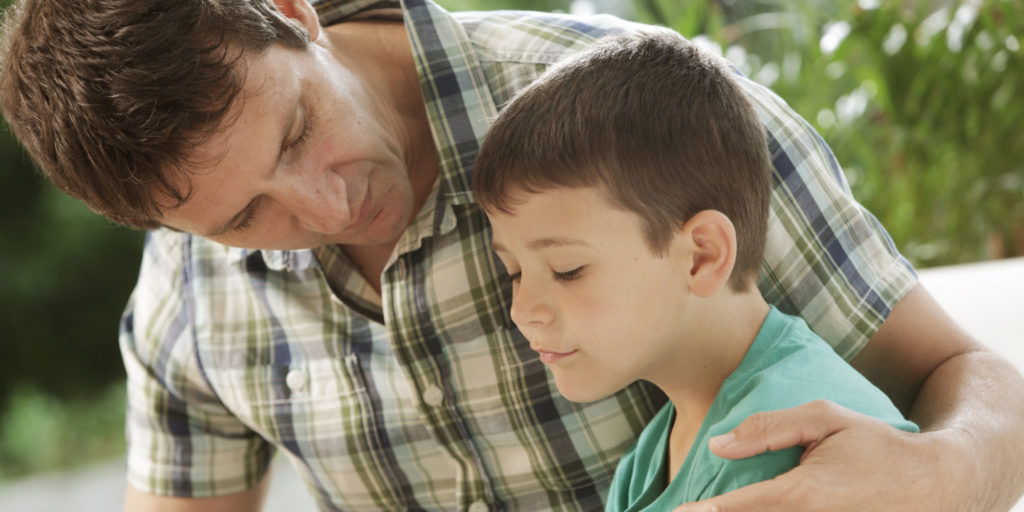 A few days ago, a sister in Christ sent me an excellent article by David Mathis (no relation) addressing parents apologizing to their children. She suggested I share it with the church family.

Here are a few paragraphs of Mathis’ experience with his own father:

Few moments, if any, were as arresting, as moving and as unforgettable as when Pop admitted to me – at age five or seven or ten – that he had overreacted, and that he was sorry.

I was moved, at least in every case I remember, because I was not an innocent victim. My disobedience, rebellion, and immaturity were the catalyst for our clashes. I had sinned first, and I knew I was wrong.

But Pop had joined a Bible study, and his heart was becoming more tender to the word of God. He wanted his conduct to come increasingly in line with the gospel he loved. Not just in public, but in private. Not just as a dentist and deacon where the world was watching, but as a father, when only little eyes were watching. He began owing the fact that even his child’s bad behavior was not excuse for a sinful response. He was learning first to recognize and admit his own sin, and remove the adult log from his own eye, in order to be a more careful and patient remover of the childhood speck from mine.

I write this to parents with children still in the home knowing it will be read by others. I trust us others will benefit from this as well — that all of us will reflect in particular on the phrase, ‘Pop’s heart was becoming more tender to the word of God.’

That’s what saving grace does, it makes us more tender, more sensitive to how holy God is and the sin that still remains in our lives. It trains us to more quickly deal with our own sin. My guess is a good number of us can relate to Pop – sin within raises its ugly head with the people we love the most. Our mates, our children, our siblings. Their sin may stir up ours yet grace won’t allow us to ignore ours.

For sake of time, I’ll stick with addressing how we respond to our children when we’ve responded with sin to theirs. I’m going to borrow some themes from David Mathis’ essay but do my best to write according to my own convictions. I’ll include the link to his essay below.

Dads and Moms are the Adults
That should go without saying but in our youth-idolizing culture it’s easy to assume we can have our kiddos and our kiddy-mindset too. A couple years ago my son in his 20s told me, “I’ve learned that the parents I thought were cool as a teenager were really jerks for parents. They were just wanting to be accepted by us. At first that seemed cool, because they let us get away with a lot of stuff. But now I see they were afraid of what we would think of them – yet we were the ones who really had no clue.”

The Apostle Paul wrote: ‘Fathers, do not provoke your children to anger, but bring them up in the discipline and instruction of the Lord’ (Eph. 6:4). My focus is on the latter half of that command. First, dads (and moms) are to bring them up. That requires a distinction between parent and child. Parents have a task – bring them up. The implication is that we bring up our children to adulthood – to acting appropriately and responsibly. Second, there is a curriculum – the discipline and fear of the Lord. At minimum this means we as parents are reverently aware we and our children are living under His loving and pure gaze and therefore we will have expectations in behavior and attitudes as our children grow into adulthood. The point I emphasize here is parents cannot blow off their children’s disobedience. And since our children are born with a sinful nature, there is bound to be disobedience. Which means correction and discipline are part of the package of parenting.

Dads and Moms are in Process
Just as we do not blow off our children’s disobedience, God doesn’t blow off ours; He chastens those whom He loves; our heavenly father is ‘bringing us up’ (Heb. 12:4-11; Eph. 4:1; Phil. 2:13). David Mathis makes the great observation: “Parents walk with children through an intense season of physical development while God walks with parents through an intense season of spiritual development.” That development of parents will reveal sin often in direct relationship to our family. Mathis again: “It is not a question as to whether we sin against our child. All parents sin against their children. The question is whether or not we recognize and confess our sin…”

‘Fleshly’ or ‘Spiritual’?
So when we blow it: When we lose our temper; when our words drip with bitter sarcasm or impatiently hissed brevity; or worse — What will we teach our children? Will we ‘lord it over them’ because we are the parents? We are in authority after all. Or will we teach them we too are under authority? The Apostle Paul rebuked the Corinthians for their infantile attitudes towards each other. “You are still fleshly… For there is jealousy and strife among you” (I Cor. 3). What will it be dads, moms? Will we be fleshly or spiritual? Will we bow the knee, acknowledge our sin to God and confess it to our children? Will we go to them and say, “I blew it, and I’m sorry. I was wrong”?

I don’t have the permission of my children to share specifics, but in my parenting there were times things got ugly with tension. It stemmed from the fact my children required correction, even discipline from me, and no parent should relish or enjoy disciplining their children. That’s the tension part; I didn’t like to discipline. The ugliness part came from responding in frustration, self-righteous anger. The ugliness didn’t go away by itself. Fellowship was broken between me and them and broken between me and my Lord.

It was at those times, I had to decide, would I be fleshly or spiritual? Would I put on a façade of parental politeness and carry on as though I’d done nothing wrong, or would I take the lead and seek reconciliation? I’m grateful the Lord manifested He was working in me, and gave me grace to acknowledge my wrong. I’m grateful God’s word was a two-edged sword doing its work in me; it wasn’t comfortable, but its piercing conviction did have its holy result.

Let me wrap this up by bringing up something David Mathis and I would differ on; I did not ask for my children’s forgiveness. I simply went to them and apologized, acknowledging my wrong. David suggests a parent should ask their children to forgive them. My thinking goes like this:

+ First, I am the parent. And even though I was wrong the fact remains, I am their parent and they are my child and in that relationship it is my duty to discipline them. That’s not up for debate. So to ask them to forgive me would, in my opinion, require much wrangling of words as to what exactly were they to forgive me for. Because my sin involved them, I had to confess it to them. But the fact remains, their disobedience to me was an issue I had to address and should not seek forgiveness for that or seek to ‘hash that out’ with them.

+ Second, to ask them to forgive me implies they have an option – to do so or not. Scripture commands us to forgive others (Eph. 4:32; Matthew 6:14,15). So, what if your child is so upset about the whole matter, when you ask their forgiveness they say no? Or they say nothing? What are you as the parent going to do then? Discipline them? It seemed best to me that I let them wrestle out their forgiveness of me before God. If the essence of forgiveness is to ‘not hold a wrong against another,’ the wronged person shouldn’t be manipulated to do so. I have felt for some time that to ask another person to forgive me subtly turns things around and the focus has moved from my sin to their obligation to respond to my request. When in reality, their forgiveness of me is between them and God. Which leads me to my final observation:

+ I think we should give our child time to sort things out. It’s one thing to take our four year old on our lap and apologize to them; typically they will respond in child-like simplicity and quickly at that. It’s another to go to our teen age child and try and set things right. There’s a jumble of emotions and thoughts going through their head. I found with my children to try and get things quickly patched up and everyone say the right words, tended toward the fake, even manipulative. There were several times that several hours, even days transpired, before a genuine conversation took place, if at all. One child admitted, after several years of being out of the home, how my apology to them had so gotten to them, but as a teen they weren’t going to let me know! I’ll take the late admission and let the Lord figure out their heart, and be grateful for the good relationship today.

Well, again, I’ve provided the link to David Mathis’ essay below; I so appreciate what he has to say. And it is my prayer that we all will seek to keep short accounts, being kind to one another, tender-hearted, forgiving each other, just as God in Christ has forgiven us.