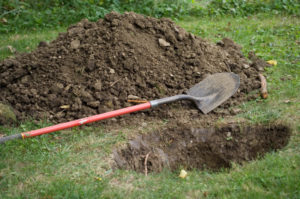 Thus, it behooves us to evaluate things we say against Scripture so that we accurately represent the faith. Oftentimes newer or mis-shepherded Christians will latch onto sayings, get swept down the stream of error, and cause others to do the same.

Here are a few such Christian sayings that ought to be buried.

Sometimes the idea is phrased in other ways: “They are a believer, but have not yet decided to follow the Lord.” “They prayed the prayer, but do not follow Christ or live out their faith.”

Burial of this saying is needed for several reasons. Christ is the absolute, Sovereign Lord whether we have acknowledged it or not (John 13:13, 1 Tim. 6:15; Rev. 1:8, 4:8, 11, 19:16). He is Lord of all humanity, regardless of our spiritual persuasion on the matter (Phil. 2:9-11). History will see a day when every person born will affirm the objective title of Jesus as “Lord,” whether redemptively or wrathfully. Thus, we can no more correctly say, “They are a Christian but haven’t made Christ Lord yet,” than one could say, “I’m French but haven’t made Francois Hollande my president yet,” or, “I am a dolphin, but have not decided to make water my surroundings yet.”

Sometimes when people say this, they mean, “I am a Christian, but am not living as if he is my Lord yet.” But this is equally erroneous. It’s a peculiar, but far-too-common idea. No such saying or idea is observed in Scripture. In fact, it seems that Christians in the NT understood that becoming a Christian was a radically privileged transfer from under the lordship of sin and Satan to under the lordship of Jesus Christ (e.g. Luke 19:8,John 20:28, Rom. 6, Col. 1:13, 1 Thess. 1:9). That a disciple of Christ is one who is taught to obey everything Jesus commanded indicates the concept that to be a Christian is to operate under his lordship (Matt. 28:18-20, John 14:15, 1 John 2:3-6). In the first century, individuals of whom this saying was spoken would have been re-evangelized.

On a related sidenote, I once had the opportunity to ask a Christian who had lived through communist USSR if, prior to 1991, this kind of no-lordship theology existed there. He answered with a serious, “No.”

This is not to say that one will exhaustively comprehend the implications of Christ’s lordship the moment of salvation. But it is to say that he is our Lord, even prior to regeneration.

Similar to the above, this idea is foreign to Scripture. This is not to say that someone cannot be regenerate at a young age, or that sanctification will not be a bumpy ride. But it is to say that upon conversion, the Holy Spirit will begin to illuminate and enable both the idea and reality of following Christ. Good works have already been ordained (Eph. 2:10).

God is too good to leave us in the wild oats (1 Cor. 6:11). The Holy Spirit, who indwells his people, loves them too much to allow them another day under Satan’s lordship (Eph. 5:8). Regeneration by faith in Christ is the moment our Father takes our hand and instantly begins raising us up into the image of his Son (Heb. 12:5-11). Those without child-training are not yet his children (Heb. 12:8). God is no fickle, forgetful father. Thus, we ought to bury the saying and instead, say something like, “I remember giving some ascent to the facts of the gospel as a child. But, I lived for many years with no evidence of regeneration, so, biblically, I would have to say that I was not converted until later.”

This one is baffling. Christians are indwelt by the Holy Spirit. Scripture gives us no indication that the Holy Spirit is OK with remaining detached from the body of Christ. The Spirit seeks to glorify Christ and bring unity to the body (John 16:14, Eph. 4:3-4). We are hard-pressed, then, to justify that the Spirit is not going to move the regenerate into the visible body of Christ; something which is essential to our identity and existence. It’s one thing to need a little nudge now and then to be more faithful in plugging in (Heb. 10:24-25). But it’s quite another to persist in a refusal to do so. If a professing Christian has to be urged to plug into a NT kind of church, it’s probably not best to prod them to be a better Christian, but evangelize them to become one. D.A. Carson has rightly said, “It is inconceivable in the first century that someone would say: ‘Yes, I’ve become a Christian, but I don’t want to join a church.’”

This is similar to the previous, except it reacts to the idea of meaningful local church membership. This all-too-common saying is peculiar, because we hardly take that approach in other areas of life. We unhesitatingly join gyms, banks, and jelly-of-the-month clubs. But when it comes to God’s treasured institution, we hem and haw.

Meaningful, formal membership is a reality amply justified from Scripture. Things like the 40 one anothers, the example in Scripture, NT church lists, discipline, and elder-accountability evidence it. Why would we not want to joyfully express the most privileged, exalted identity that a human being could possibly have; “body of Christ”? What hesitation could one possibly have at being visibly linked to God’s cherished, beloved, and born-again institution? It’s amazing that Christians would utter such a saying. And, considering the colossal price Christ paid for his Body, it can only grieve him that we would.

In keeping with God’s word, the saying should be rearranged, “Since I am part of the global body of Christ, I get to express that as a visible member of the local body of Christ.”

This saying is pulled from Matthew 18:20, where Jesus said, “For where two or three are gathered in My name, I am there in their midst.” Christians typically use it to further a plan they have or prayer request they make.

Using the passage this way is a violation of Jesus’ authorial intent. He did not mean, “As long as you have two or three, I am there to support you in whatever.” Instead, the context involves the process of church discipline. The “two or three” refers to the witnesses from vv. 16 and 19 who confronted the individual in unrepentant sin. As a church must discipline the individual in accordance with Christ’s command (Matt. 18:17), they are assured that he is affirming them in this difficult process.

And, if God wishes to grant us a prayer request, he will not do so on the grounds of two or three praying, but because it pleases him to do so (Ps. 115:3).

Often we will say this in response to a pleasurable or favorable work of God’s providence in our lives. “I was so bummed that I lost my job. But, through it all, I grew in Christ and got a better job. It’s totally a God thing.”

And no doubt. Providence, whether pleasurable in the moment or not so much, is certainly God doing his thing. However, it is not only favorable moments of life that are a God thing. Everything is a God thing and if anything is not a God thing, we’re in trouble. How can we be sure that history will end up according to Revelation 21-22? “In the day of prosperity be happy, but in the day of adversity consider-God has made the one as well as the other so that man will not discover anything that will be after him” (Eccles. 7:14).

This is one of the more common Christian sayings. But it’s probably one we should bury.

Typically, we say this in response to individuals speaking into our lives about sin. “Quit trying to do the Holy Spirit’s work in my life. He will convict me if needed.”

If you’ve struggled like I have, often when we say this, we are not doing so out of a humble concern for a biblical pneumatology or pure reverence for the Person and work of the Holy Spirit. Instead, we say it out of arrogant reaction to someone trying to be faithful to the biblical commands on confronting one another. We are defending ourselves: guarding the citadel of our righteousness, we bust out this strategic move in a desperate moment. We play the “don’t be the Holy Spirit” card, perhaps, because, like the “Draw 4” in Uno, it’s a seemingly impossible one to counter. Someone mentions the role of the Spirit and, well, I would never want to think I’m God, so, game over.

But is it a legitimate card? Consider a brief reminder of what Scripture teaches the Spirit does and what we are to do. God gives his children the Holy Spirit to make them holy; to make them more like him. He will settle for nothing less than children who resemble Dad. Out of love for us, the Holy Spirit works like the skillful potter’s hands, constantly shaping the regenerate into the image of Christ by exposing and eradicating our sin as was never before possible (John 16:8, Rom. 8:12-14, 1 Cor. 6:11, 2 Cor. 3:18, Gal. 5:16-17).

However, in the manifold wisdom of God, he has chosen to use imperfect humans to accomplish his perfect purposes. God commands believers to care so much about his sanctifying purposes, and each other’s best, that we lovingly help one another see and flee our sin (Prov. 27:5-6, Matt. 18:15, Heb. 3:12-14, Gal. 6:1-3). This means he is going to use humans to partake in the work of the Holy Spirit, not the least of which includes exposing and eradicating sin. Thus, it follows that fellow-Christians speaking into each other’s lives very well could be the Holy Spirit using them to do his work.

“Well, yeah, but I just don’t want those people taking over the Spirit’s role.”

Therefore, we ought to find alternatives to the saying, “Stop trying to do the Holy Spirit’s work in my life.” Instead, we might say, “I do not want you to be used of the Holy Spirit right now to do his sin-exposing and sin-eradicating work in my life because I’m not being humble.” Or, if we can do so in a spirit of humility and reverent concern for a biblical pneumatology, we could say something like, “I know that God commands us to lovingly confront each other’s sin. Thank you for trying to be faithful to that. But it seems like you may be doing that too much recently. For example… Am I seeing that accurately?”

We are given the ability of speech and communication for the glory of God. When it comes to common sayings, we ought to evaluate them in light of God’s word in order to accurately represent the faith. Though they may be clever or full of color, if they are not in line with Scripture, we do well to bury them.